skip to main | skip to sidebar

In the past, I've referred to the three dogs that we regularly find hanging around our front yard gate. Limpy (aka: To-to) the smallest of the three, was taken to the groomer a week ago to be cleaned up from top to bottom (and inside out), and has since been allowed to come into the yard. Here, she peacefully hangs out, free from the ongoing stresses that come from being a street dog. She has now come to expect regular feedings, shade from the heat, cover from the rain, and protection from the several of other stray dogs that roam nearby. She is showing her age, but not to an extreme. I guess we are an unexpected part of Limpy's retirement plan. 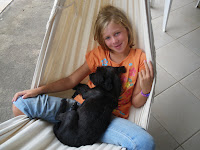 She did seem a bit lonely being apart from her trio pack. When we would spend the entire day away from the house, we were told she cried a large part of the time. So it seemed like a good idea to clean up her bigger buddies and invite them into the yard, as well.

Blondie (aka: Lucy) patiently awaited her grooming appointment, which wasn't able to be booked until the following week. 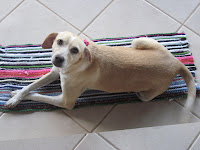 However, Spotty suddenly seemed to disappear one day. Being street dogs, we weren't too worried, as they are free to come and go as the wind takes them. But it was a bit unusual because Spotty wasn't one to venture far from our gate.

The date of the grooming appointment came and Blondie had to go solo. She received a good cleaning, much like Limpy, and was then welcomed into the yard where she has been enjoying a reunion with her buddy. I walked the neighbourhood looking for Spotty, calling for her, knowing full well she neither knew our name for her, or the English commands I was demanding. It just seemed like the thing you do when you're missing a dog.

I couldn't find a sign of her anywhere, so we actively hoped that either she had found a new 'forever' home, or was on an extended adventure, bound to return shortly.

Well, this morning, as Rich and the balance of the kids were walking the street over to their Capeiora class, they found Spotty. Only, Spotty wasn't moving. In fact, she wasn't even breathing. It looked like she had laid down for a rest under the shade of a large green tree along the side of the road, and fell into a very deep sleep... one that cannot be awoken from. Some of the kids ran back home to let Jillian, Ryan and I know what had happened. In disbelief, we threw on our sandals and walked to where our little friend was laying motionless.

Sure enough, Spotty's eyes had a vacant emptiness about them, and the flies were beginning to swarm her quiet body. She couldn't have been lying there for very long – possibly from the day before at most. We gathered around her, wondering what had caused her to pass away, wishing she had come home sooner so she could have been able to come into the safety of our yard, and remembering her wagging tail and happy eyes.

Rich headed up to the Capeiro class to collect a wheel barrow and some gloves so we could pick her up and move her to a place where she could be buried, while Ryan went to get a shovel from our home. When Rich returned, he brought back one of the other students from class, to help out. With tender care, Rich picked up Spotty from her sheltered spot, and placed her into the wheel barrow. The other student took a moment to close his eyes and pause before carefully picked up the wheel barrow handles and together, we all made our way to where Ryan had been digging. As this gentleman pushed Spotty in the wheel barrow, he sang a most interesting and haunting song. I had no idea what words he was speaking, but the tune seemed like the perfect sound to respect the sadness we were all feeling.

Another student just arriving for class also joined our procession, and soon we approached Ryan and the deep hole he had been working on.

Rich, again, gingerly picked up Spotty and laid her into the hole. Anyone who wanted to was given a chance to say goodbye to Spotty. Jillian, Emily and I were crying, the gentleman was still singing his enchanting song, and when it was time, Ryan began to slowly fill the hole that now contained our Spotty.

Once she was appropriately buried, we started to make our way out of the park and back to the street. The gentleman who had been so helpful, kissed a sobbing Jillian on the head and placed a necklace he had been wearing around Jillian's neck. It was his way of showing the gift that Spotty was to her. Jillian was most grateful. The girls weren't interested in their Capeiroa class any longer, so Rich took the other kids to class while I took the girls home. We found several flowers we wanted to leave at Spotty's grave, Emily made a grave marker that simply said, “Spotty”, Jillian scooped up a small handful of kibble to spread over Spotty's grave, and I collected a bunch of rocks to decorate.

We headed back to the place where Spotty lay, and with our treasures and decorations, went about the business of grieving. When we were done, Spotty's place looked perfect, and the girls felt a bit better about Spotty's death. 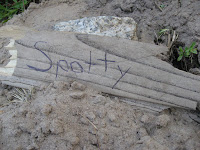 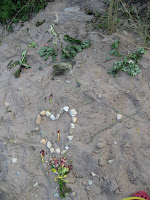 We visited the site once more to show the others what we had done while they were at class. They seemed to agree Spotty had been buried well. It was a tremendously sad thing to lose Spotty, even though she wasn't 'ours'. But we took consolation in knowing she was no longer going to have to live the life of a street dog. She was at peace now.

In talking with Chris, our neighbour, it sounds like one way that people help 'control' the stray dog population is by leaving out poison for the dogs to consume. We do not know if this is what happened to Spotty, but a water container was found right by her body. Perhaps someone had put something into the water with the intent to eliminate her. The water container was dumped just in case. Or perhaps she had some disease that claimed her during the night. Or..... The list goes on. In the end, it doesn't really matter. Spotty has no worries now. Food, love, shelter... all requirements she doesn't need to seek out any longer. Now, she just rests.